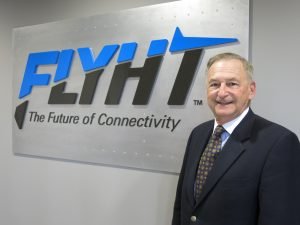 Calgary, Alberta – June 3, 2015 – FLYHT Aerospace Solutions Ltd. (TSX-V: FLY) (OTCQX: FLYLF) (the “Company” or “FLYHT”) is very pleased to announce that Major General Mark V. Rosenker has been elected by its shareholders as a director of the Company effective June 2, 2015.

General Rosenker has many years of experience in the aviation industry including a past tenure as chairman of the National Transportation Safety Board (“NTSB”). He is currently a consultant to CBS News and appears on their network to discuss transportation safety issues.

Bill Tempany, CEO stated, “The addition of Mark to the board further contributes expertise for us to succeed in a business that relies on well-connected people to make important decisions about direction. In my discussions with Mark, he is a strong advocate of triggered data streaming and recognizes FLYHT as positioned well ahead of the competition. We are very excited to welcome Mark to our board and looking forward to his help to accelerate the growth of our Company.”

General Rosenker was the 11th Chairman of the NTSB. He started on the board in March of 2003 and was appointed Vice Chairman by the President to be. He later became acting chairman and then chairman in August of 2006 and led the agency until he left to return to the private sector in August of 2009. He served President George W. Bush as Deputy Assistant to the President and Director of the White House Military Office from 2001 until the President nominated and appointed him to the NTSB. He was unanimously confirmed three times to his board positions by the US Senate.

A retired Major General in the US Air Force Reserve, General Rosenker entered active duty in June 1969 as Second Lieutenant from the University of Maryland ROTC program and completed more than 36 years of service before retiring in December of 2006. During his career, General Rosenker received numerous awards and decorations including two Air Force Distinguished Medals and the Legion of Merit. General Rosenker is a graduate of the Air Command and Staff College and the Air War College.

General Rosenker is a member of several corporate boards, as well a member of the Aerospace Industries Association’s Board of Governors. He is currently President of the Transportation Safety Group LLC, a specialized consulting company.

Mr. Rosenker commented, “I’m honored and energized to have been appointed to the board of directors of FLYHT Aerospace Solutions. I have long believed that innovation, training, technology and information are keys to enhanced safety and accident prevention. What FLYHT brings today to the global industry is a combination of proven products and services that are cutting edge and raise the bar of safety for all that implement them.”

This appointment is made subject to TSX Venture Exchange approval.

FLYHT provides proprietary technological products and services designed to reduce costs and improve efficiencies in the airline industry. The Company has patented and commercialized three products and associated services currently marketed to airlines, manufacturers and maintenance organizations around the world. Its premier technology, AFIRS™ UpTime™, allows airlines to monitor and manage aircraft operations anywhere, anytime, in real time. If an aircraft encounters an emergency, FLYHT’s triggered data streaming mode, FLYHTStream™, automatically streams vital data, normally secured in the black box, to designated sites on the ground in real-time. The Dragon is FLYHT’s latest product, a revolutionary light weight portable satellite communications device that blends existing FLYHT technology with that of the iPad.